We played the English version of Rengoku and found that the game was much more than a series of futuristic android battles. Read on to learn more about the story.

We got a chance to play the finished version of Rengoku: Tower of Purgatory, so for the first time we had English dialogue and subtitles. In our native tongue, the storyline was clearer and the characters more defined. Now, instead of asking "What are they saying?" we were prompted to ask deeper questions like "Why are these androids after me?" and "Why am I the only one who cares?" We ran through the early levels of the scenario mode again to uncover clues to our character's journey.

The opening movie begins with a question: "Could a legacy of slaughter and destruction lead to anything but ruin?" The androids have left behind "heaps of corpses" and now their minds are scarred with deadly images. It seems like the images only bother one android, who, through these opening credits, kneels alone in a room looking up at a shaft of light. The android appears to be looking for a deeper meaning to its life. This is your character.

If you've been following our previous coverage of Rengoku, you'll know that you must defeat other androids in various rooms in order to unlock more rooms and eventually advance to higher floors. All the while, you pick up various weapons like guns, swords, and hammers that you can attach to various parts of your body. As you make your way up the tower, you'll encounter different types of androids who sometimes try to double-team you. This is all very cool and challenging, but why are we fighting?

Although he's not much of a talker, Mars, the first boss character, helped inspire the first bit of dialogue from our ponderous character. Mars, who's equipped with two arm blades, gets straight to the point: "A-challenger? You must defeat me to proceed to the next level." Our character, however, questions the "why" to all this metal-on-metal crime and asks a series of questions: Why are we fighting? Who programs us to fight? Do we fight because we want to, or is someone ordering us to want to fight? Interesting questions, indeed, but it's obvious that Mars isn't in the mood to talk. He tells us to switch from talking mode to fighting mode so we can start the battle.

From the questions our character asks, we start to wonder whether he is more human than robot. Like the humanlike robot in the movie I, Robot, our character is in search of the truth, and we're interested in seeing what lies at the end of his journey. Of course, you'll also wonder what other kinds of weapons you can attach to your head and what other kinds of androids will try to kill you. We'll bring you the answers to all of these questions and more in our upcoming review. 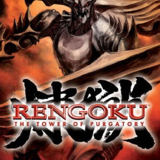 Rengoku: The Tower of Purgatory
Follow
$14.99 on Walmart
Buy