Siege of Dragonspear will introduce the Shaman class, and seven new chapters to play through.

Role-playing game Baldur's Gate: Enhanced Edition will be getting an expansion titled Siege of Dragonspear, publisher Beamdog announced on a livestream today. The expansion will introduce seven new chapters and feature 70 new areas for players to explore. Dragonspear will also include a new class, the Shaman class, who can summon ghosts and cast druid spells.

Dragonspear will sport an entirely new user interface, with an improved journal system and combat health bars offered as an option. The game will also have two new difficulty settings; story mode, which was first introduced in the Icewind Dale: Enhanced Edition, and allows players to go through the game's story without too much challenging combat. The second mode is titled Legacy of Bhaal and is similar to the Heart of Fury mode which was featured in Icewind Dale: Enhanced Edition, which adds what Beamdog described as an "all new level of challenge for veteran players."

Baldur's Gate: Enhanced Edition was first released for PC in November 2012. As its name suggests, the game is a remake of 1998's Baldur's Gate. Earlier this year, Beamdog first teased that a new game in the Baldur's Gate series was being worked on.

Siege of Dragonspear does not currently have a release date. 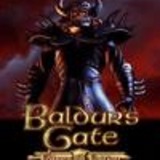