Be the best king or queen you can be.

Reigns: The Council, an asymmetric party game based on the mobile hit simulation, has crossed its crowdfunding goal and will move forward with production. The game had set a goal of $80,000 on Kickstarter, and crossed it on September 13 with approximately $83,000 pledged as of the time of writing.

An update to the Kickstarter page celebrated the milestone and, true to the game, presented a binary choice for its first stretch goal: shiny golden cards or an improved Kingdom game board.

Reigns: The Council is a party game for 3-6 people. One player assumes the role of monarch while the rest are his or her advisors. They each draw a secret goal card defining what they want the state of the realm to be as of the time when the reign ends. That means their advice isn't necessarily trustworthy, since they might be steering the monarch wrong to achieve their own ends. The monarch will have to decide which proposals to select to balance four attributes: church, people, army, and wealth. If those traits get out of balance, the monarch's reign ends and the round is over.

It's based on Reigns, which originally released on mobile in 2016. That single-player game had you selecting from between two proposals at a time, in a similar effort to balance those four kingdom traits. A sequel called Reigns: Her Majesty was released in 2017. Then in 2018 the game received a spin-off, Reigns: Game of Thrones, based on the popular (and now concluded) HBO series. 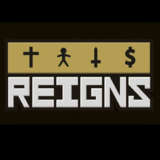