Red Orchestra 2 free on Steam for one day

The realistic WWII shooter can be yours free of charge today.

Realistic World War II shooter Red Orchestra 2: Heroes of Stalingrad is free to download on Steam for the next 24 hours, courtesy of developer Tripwire Interactive.

From now until April 24 at 10 a.m. Pacific, anyone with a Steam account can permanently add the first-person shooter to their library by clicking "Install Game" on its Steam page.

You'll get all of RO2's content, but none of what's included in the game's standalone expansion pack, Rising Storm, which continues to be sold separately for $20. This free release coincides with the recent launch of the Game of the Year edition of Rising Storm that includes all of the available content for Red Orchestra 2 and Rising Storm.

Red Orchestra 2 was originally released in September 2011. It was praised for its realism, although GameSpot's review notes the punishing difficulty that stems from that realism may not be for everyone. 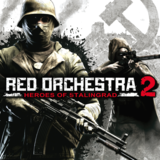