Volition Inc.'s Saint's Row 2 was one of the few bright spots in THQ's otherwise grim fiscal year. The title sold 2.6 million units through the end of THQ's fiscal year, pushing the franchise to more than 5 million in sales. Given the studio's ability to ship high-selling products, it stands to reason, then, that THQ is eager for Volition to release its next project, Red Faction: Guerrilla.

Today, THQ confirmed for GameSpot that Red Faction: Guerrilla on the Xbox 360 and PlayStation 3 is now expected to be released on June 2, a week earlier than previously announced. Unfortunately, PC gamers will be left to wait a bit longer, as THQ also noted that the desktop edition has been bumped to a broad "summer" release window. According to a THQ representative, the PC edition's delay came as a result of the title requiring additional development time.

Red Faction: Guerrilla is set on a terraformed and colonized Mars that saw an uprising of miners in the first two games. The forthcoming entry will depict the struggle between descendants of a martian mining colony and the totalitarian Earth Defense Force looming over them. In addition to physics-based destruction, Red Faction: Guerrilla will allow players to kill one another with a very large bird. 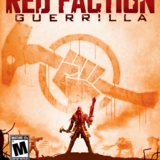