Razer's Captain America Xbox Controller Can Do This All Day

Few people are worthy enough to wield the shield of Captain America, but you can at least get your hands on a star-spangled Xbox controller from Razer. Inspired by Sam Wilson's adoption of the Captain America identity in Marvel's The Falcon and the Winter Soldier TV series, Razer's limited-edition controller comes with a matching charging stand and is available to order now for $180. 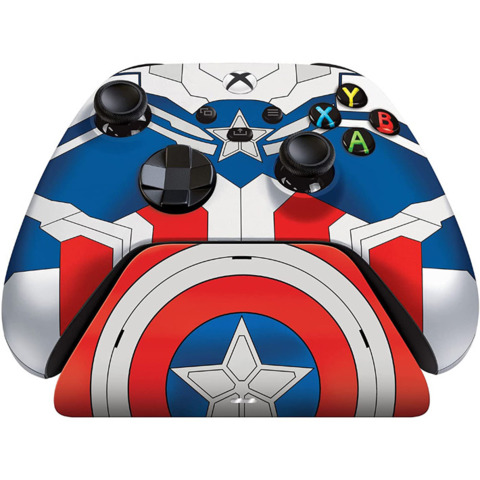 While it isn't made out of Vibranium, the officially licensed Marvel Xbox controller does come with a charging stand that allows you to admire it while you're refueling its battery with electricity and patriotic justice. Underneath the sleek selection of colors, this is still the latest edition of the Xbox wireless controller that was introduced with the Xbox Series X|S generation of consoles.

The Xbox "Core" controller has redesigned ergonomics that make it incredibly comfortable to use for a marathon gaming session, textured grips so that you won't have to worry about dropping it, and a quick charge system when it's not in use. One of the best features in the design are the Impulse Analog Triggers, pressure-sensitive sticks that provide a finer level of precision and nuanced haptic feedback.

It's also worth noting that you can use the controller on your PC as well, either with a direct USB-C connection with a wireless adapter that's sold separately. Otherwise, expect a controller with a reliable build quality and a battery life that can go the distance.