Next outing of Ubisoft's loony lagomorphs will only be released on the Wii and DS this fall.

While it technically starred Ubisoft's limbless mascot Rayman, the featured performers in the publisher's Rayman Raving Rabbids were without a doubt the cute-yet-criminally-insane bunnies of the title. Those with a soft spot for the freaky fuzzy critters need fret not. Yesterday, Ubisoft revealed it was working on Rayman Raving Rabbids 2. Today, the French publisher unveiled the first details about the game--which will arrive exclusively on the Wii and Nintendo DS this fall.

After holding Rayman captive in his own world in the first game, the Rabbids' plans will hit a little close to home in the sequel. That's because they set their warped little minds on ruling the Earth, and at the game's outset they've established a beachhead for their interdimensional invasion in a simple shopping mall. Not one to let the Rabbids have their way, Rayman disguises himself as one of the Rabbids and attempts to thwart their plan from the inside.

Gameplay in Rayman Raving Rabbids 2 will center on 60 minigames, which will see players go around the world foiling the obnoxious-yet-adorable invaders. For more information, check out GameSpot's hands-on preview of the game's multiplayer demo. 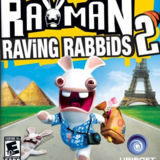