Details are hard to come by at this stage, but Microsoft says the team at Rare is making "something truly original and incredibly special." Rare's Louise O'Connor is the executive producer of the game.

Everwild is still early in development, but Microsoft did share some intriguing initial details about the project. "The Everwild team is focused on building an experience that allows for new ways to play in a natural and magical world," reads a line from its announcement, and continued, "Everwild will give you memorable, engaging and meaningful experiences for players everywhere to share."

That's all Microsoft had to say on the matter at this point. Everwild will presumably be coming to Xbox and PC platforms, and Game Pass subscribers should get it for no extra cost, as is the case with all first-party Xbox games.

Everwild is at least the third ongoing project at Rare. The studio continues to support its pirate game Sea of Thieves, while it's also working with DLaLa Studios on the new Battletoads game.

Rare also used its appearance at X019 to announce the next free update for Sea of Thieves. Called The Seabound Soul, the free update is scheduled to launch on November 20.

It features a new story mission following Captain Pendragon and his journey to find out what happened to the mysterious Ashen Dragon ship while learning more about a "sinister new threat." The update also adds a new item, firebombs, which can be fired from cannons. There are also new cosmetic items to buy with microtransactions in the new update.

Rare said it remains committed to supporting Sea of Thieves despite having Everwild and Battletoads also in development simultaneously. 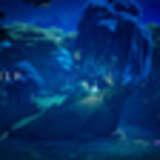