Ubisoft announces that it will release a PS2 version of Tom Clancy's Rainbow Six 3 in March.

Ubisoft has today announced that it will release a PlayStation 2 version of Tom Clancy's Rainbow Six 3 in March. Developed by Ubisoft's Shanghai studio, the game will boast a number of features not found in the Xbox version released last year.

"The Tom Clancy brand represents one of the best-selling video game franchises ever, and Tom Clancy's Rainbow Six 3 is already a runaway success on the PC and Xbox. We expect a repeat performance," said Florence Alibert, marketing director for Ubisoft Europe, Middle-East, and Asia. "Thrilling and realistic single- and multiplayer gameplay, intelligent AI, stunning graphics, and an amazing real-time voice command system are combined to deliver the best counterterrorist gaming experience on the market--period."

In addition to the campaign from the Xbox and PC versions of Rainbow Six 3, the PS2 version will boast an additional mission, extra multiplayer maps, and a new two-player split-screen mode for cooperative play. Voice command technology will be supported for players with a headset, thus allowing them to communicate with both AI squadmates during campaign missions and other players in the game's three adversarial modes of online play.

We'll bring you more information on the PlayStation 2 version of Tom Clancy's Rainbow Six 3 as soon as it becomes available. 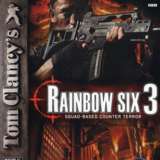