We kill lots and lots of monsters in action role-playing game fashion while teaming up with random strangers with GungHo's latest.

Make no mistake: Game Arts' latest foray in the game scene, titled Ragnarok Odyssey, reeks of the action role-playing game odor stemming from Capcom's Monster Hunter. After all, you go off on a series of chapters divided into a multitude of quests ranging from the banal "kill a number of creatures" to "collect a bunch of stuff by breaking barrels and killing monsters" equipped with generous time limits. Occasionally, you fight a giant monster or two with weak spots that also perform huge elaborated attacks with few windows of opportunity for your warrior to strike.

Players get to pick from five classes: the swordmaster, the hammersmith, the hunter, the cleric, the assassin, and the mage. Each has its own style of play: the hammersmith trades speed for a high attack rating, while the assassin's quick strikes deal little damage. To be fair, the assassin class can at least take a few more hits, thanks to its defense rating. The class is quick on its toes too, so players will need to learn to time dodges and evade enemies.

The hunter has the highest attack speed and range among the classes but has horrible damage output and hit points. However, mid-game attacks like the vulcan arrow can deal good amounts of damage, and the arrow shower can soften up a cluster of enemies. Because it's a primarily ranged class, it's best for hunters to stay far away from enemies and snipe them from a distance.

The mage in the game is a bit of an oddity; the class has good attacks and area-of-effect spells, but the combos that throw out fancier and hard-hitting spells come from melee attacks. When you add to the fact that a mage's hit points and defense ratings are atrocious, we couldn't figure out a reason to pursue this class.

While the hammersmith was our personal favorite--any class with a huge hammer-drill hybrid that deals big damage is a winner in our book--new players should stick with the swordmaster. Attacks are reasonably speedy; you can deal high damage if you time your inputs for the end of their combo strings; and it's one of the few classes that can guard.

Players can also tweak classes with the use of cards. Before each mission, you can choose as many cards as you can to equip, depending on how much space they take up on a character's card-equipping slot. Some common cards with a one-star rating take up as much as one, while rare ones can go as far as three or four slots.

Ragnarok Odyssey also makes use of its platform's touch capabilities. Expanding the map only requires you to tap the top right icon, while sending out a quick emoticon is as easy as touching the side icon. After mapping your potions before a mission, you can just drink them by tapping their icons at the bottom right part of the screen instead of pressing the select button and the face button to which they're mapped. Whether you prefer doing things the old-school way or by touching, the game's interface has got you covered.

After much questing that involved killing orcs and giant eagles using our female hammersmith, we capped off our play sessions with a few brutal boss fights: one with the Orc King and one with a purple basilisk named Hjahanir. Most bosses in the game require you to hit certain parts of its body to break down its defenses, but be careful because they gain additional moves and move even faster.

The Orc King can pull off a windmill ground slam that sucks players close to it and can also do a few air stomps followed by a charge when it has been damaged enough times. We had to run away from it while it was pulling off that move while taking care not to empty our action point gauge so that we could attack it with air combos and hammer blows.

Hjahanir can do a belly flop and shoot out purple beams in its initial state but can pull off a wider purple blast and will move slightly faster if it's hit enough times. It also didn't help that its attacks can easily afflict poison status onto players; poison in this game can drain your life bit by bit and also lasts pretty long when compared to most RPGs. The trade-off is that it is prone to being launched into the air for an air combo; players can tell if it's in that state or not by locking onto it with the trigger buttons.

Luckily, your character can be in a berserk state (called dainslef here) whenever his or her berserk meter is full. Tapping the blood-red icon on the right side of the screen will make your character move faster, deal more damage, and make him or her immune to knockdowns at the cost of his or her life draining bit by bit. To prevent your life from decreasing drastically, you will just have to kill as many enemies as possible. As such, it's wise to activate dainslef when you're surrounded by a huge mob of tough enemies. If you're careless and you kick the bucket mid-mission, the game allows you to come back to life two more times. Once that's used up and you die, you fail the mission and have to restart from scratch.

While playing this game alone is decent, the main draw is its multiplayer mode. Teaming up with a bunch of different classes while hacking and slashing away is really fun. Coordinating with others is a bit on the tough side due to the language barrier as the majority of players we found were from Japan. The developers did say before that the online components are still being updated, as GungHo will be releasing its first online expansion called "online multiplay update" in the middle of March. The company will also release a second update mid-April featuring new monsters, new stages, and new quests, though it did not state whether the content is free or comes with a price tag.

In any case, Ragnarok Odyssey can serve as a temporary substitute for fans of the action RPG genre tailored after Capcom's moneymaker. Even if it seems like it's riding on those imitated coattails, it's the only one the Vita has at the moment that isn't a port of a PSP title. So far, it's a decent role-playing jaunt, thanks to its flexible controls and range of classes, each with its own strengths and flaws. Having said that, the single-player mode seems too mundane to stand out on its own and can only thrive with its multiplayer feature.

While the game is out now in Japan, there isn't any official word on a North American and European release. 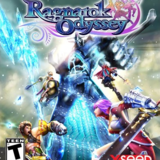