Rage 2 Reviews: Here Are All The Scores

Rage against the hype machine.

Almost nine years after its predecessor launched, Rage 2 is here. The game's May 14 release date for Xbox One, PS4, and PC has finally arrived! Now that the review embargo has lifted on the game, we at last know whether Rage 2 is any good.

In GameSpot's Rage 2 review, Michael Higham awarded the game a 6/10. He said the game contains a "variety of clever, destructive abilities [that] make combat a blast," but also an "underwhelming narrative and bland characters." Thanks to Rage 2's DLC roadmap, we know the game is getting some interesting Twitch features in the future, so hopefully that fleshes out the game a little bit.

You can read a selection of other critics' verdicts below. Alternatively, for a wider view on critical opinion, check out GameSpot sister site Metacritic.

"Rage 2 is at its best when you're given the chance to keep up a gratifying momentum in combat, but struggles to set up the scenarios its combat deserves. It's satisfying in the way clearing out an open-world checklist is, especially because powers are such a joy to use. The disappointment comes from the fact that those activities are rudimentary in nature and the decent ones end well before you get your fill." -- Michael Higham [Full review]

"Rage 2 is a really good videogame, but an inconsistent one. The combat is sensational and some of the story mission set-pieces are brilliantly constructed. But then it falls flat when it comes to world-building and creating a compelling sense of place; something the original game, for all its flaws, did pretty well. But when you're in the thick of a firefight, chaining power combos, unloading that sublime shotgun into those cocky wasteland bandits, you won't give a damn. I need to play a little more before I stick a final score on the end, but overall I'm pleasantly surprised by Rage 2. Avalanche has done a stellar job giving this largely forgotten series an exciting new lease of life." -- Andy Kelly [Full Review-In-Progress]

"For all of its attempts at garish glitter, Rage 2 is a muted, cliché, and uninspiring experience that's propped up by spectacular shooting and neverending battles that sometimes live up to the promise of a carnival of carnage." -- Daniel Tack [Full review]

"In Rage 2, you move fast and kill faster. It's the synthesis between id Software's 2016 reboot of Doom and Avalanche Studios' Mad Max, bringing together some of the best ideas from both. Moment-to-moment play on foot is fantastic with each weapon and ability just opening up your options for destruction. Driving could be improved and it's a little on the shorter side, but Rage 2 is a damned good time." -- Mike Williams [Full review]

"The interplay between the AI, your abilities, the physics of the world, and your guns is some of the best I've seen, and I never thought I would be saying anything like that about a sequel to Brown Shooter: Apocalypse. There's much more to this than its kooky, pink-hued marketing campaign. If you sleep on it, you’re sleeping on one of the best--if not the best--single-player FPS games of this generation." -- Kirk McKeand [Full review]

"Rage 2's core combat feels so much like Doom in an open world, and it wouldn't surprise me if that's exactly what this was--developer id Software testing the waters for such a concept. But were that concept ever to be made real, it will need to be executed much better than this. The Rage 2 roadmap has already been revealed, showcasing world events and wasteland challenges in an effort to follow in the footsteps of successful games like Destiny 2 and The Division 2, but the difference is that this is a single player game. Anyone who purchases this game on launch is undoubtedly expecting a full release, rather than a relatively empty world that will be later populated with content under the guise of the 'Games as a Service' industry trend. There is no reason for so much content to be time-gated. Were everything that is planned to arrive in the coming months, there's a chance that Rage 2 could have felt like a more complete package at launch--a game that has content to complement its excellent weapons and core action. Sadly, that isn't the case and the result is a sequel hasn't impressed me all that much at all, but it won’t be laid to rest until the roadmap comes to a close for a game many people will have grown bored of." -- Ford James [Full review]

"With its large open world and vast array of upgrades to earn, Rage 2 feels very much like an antidote for Far Cry fans who have overdosed on that particular style and want a new take on the large-scale shooter-RPG idea. Though Avalanche hasn't quite figured out what makes a world feel alive and dynamic or how to make good use of its vehicles, it absolutely nails the moment-to-moment combat thanks to a Doom-inspired energetic pace that few shooters manage to pull off. Combined with a steady stream of great weapons, abilities, and upgrades, its firefights are constantly reinvigorated even as mission objectives become repetitive." -- Dan Stapleton [Full review] 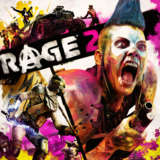