Namco's newest racing game is coming from the people who brought you MotoGP and Ridge Racer.

Namco will soon return to the automotive racing scene soon with R: Racing Evolution on the PlayStation 2, Xbox, and GameCube. The game features real licensed cars and 11 tracks, including both real-world and fantasy courses. Four gameplay modes will be available: arcade, time attack, versus, and racing life. The first three are pretty self-explanatory, but racing life merits a bit of explanation: It will provide a narrative-driven single-player experience with cinematic elements that chronicles the rivalry between two female racers as they move through the racing circuits.

R: Racing Evolution will contain eight different race types, including circuit, rally, and drag racing. The game is due out in the fourth quarter of this year, and based on its development pedigree, it's surely one that racing fans will want to watch. We'll bring you more on R: Racing Evolution as soon as it becomes available. 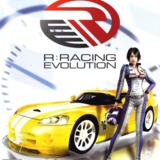