Two studios known for narrative are teaming up on Dustborn.

As reported by Gematsu, the studio said it was important to find a publisher that would share its vision for narrative-driven games. "Quantic Dream shares our passion and love for great narratives and interactive storytelling," Red Thread Games creative director Ragnar Tornquist said. "It was vitally important for us to only work with someone who truly understood and appreciated our vision for this game, and we couldn’t have asked for a better partner to help us bring Dustborn to players around the world."

"From the very beginning, we were captivated by Dustborn‘s ambition, its visual and gameplay originality, its colorful characters and the themes it addresses," Quantic Dream's CEO Guillaume de Fondaumiere added. "Our goal as a publisher is to enable Red Thread Games to express their vision in the best way and then share it with as many people as possible. Quantic Dream will provide Red Thread Games with its own technical and editorial resources."

Quantic Dream went independent earlier this year, announcing its goal to self-fund its own games, as well as providing investment to smaller studios.

Dustborn is due to be published for consoles and PC in 2021, with a more exact release window still to be announced. With a colorful visual style inspired by graphic novels, Dustborn sees the protagonist Pax road tripping across the "divided states of America" in a dystopian "post-infodemic" world. 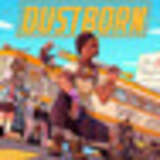