Vin Diesel's game production company got behind the Xbox shooter 110 percent. Tigon's point man on the project tells what Tigon, and Diesel, were aiming for.

Out now for two weeks, The Chronicles of Riddick, an Xbox adventure shooter from Starbreeze and VU Games, has garnered positive reviews and major interest from gamers. GameSpot gave the game a score of 9.3 and called it “the most inspiring collaboration between Hollywood and the gaming industry yet.” (The movie, which opened Friday, has come in for somewhat less glowing assessment from critics: The New York Times called it “overmuscled” and “crammed with trailer-ready taglines.”)

However, gamers needn’t worry about The New York Times raining on their fun. The game is a solid actioner that is surprisingly entertaining. A portion of that quality is the result of Tigon head of product development Cos Lazouras.

Lazouras’ 10-year history in the game space kicked off at the UK’s Bits Studio. Then, stints at Warner Bros. Interactive, Fox Interactive, and Atari (connected to the Mission Impossible brand) put him on the front lines of the burgeoning relationship between Hollywood and the game industry.

Lazouras’ experience was put to good use with Riddick. Due to Lazouras' game-industry background and Diesel’s love of games (“He’s a geek when it comes to games; he grew up playing D&D and board games,” Lazouras said of Diesel), the Xbox title “was approached as a game first and foremost, rather than an ancillary component of the movie.”

Further, Diesel’s intent to attach his name, likeness, and voice to only a top-quality game “allowed the developers open and direct communication with the creators of the film.” Says Lazouras: “We wrote the dialogue and rewrote the narrative [of the game] to make it relevant.”

GameSpot spoke with Cos Lazouras to find out more.

GameSpot: What were your goals at the outset of the Chronicles of Riddick project?

Cos Lazouras: Our goal from the beginning was to create a great game which expanded the universe created by Pitch Black and Chronicles of Riddick. The aim by all parties was to create a completely immersive cinematic experience by combining a variety of gameplay tenets driven forward by a strong story. It was really important to us that the game bring something fresh to the FPS genre and add to the experience of watching the movies as opposed to replicating them in game form.

GS: What was the process in developing the story for Escape From Butcher Bay? Was it developed before/after/in tandem with the upcoming motion picture?

CL: The game story was developed in conjunction with the movie. The story was an intrinsic factor of the game, and all parties really focused on that being the driving force of the gameplay.

GS: What has the reception of the game been like so far, both from gamers and from retailers? How does it compare with your expectations of how things would pan out?

CL: The reception to the game has been phenomenal from a consumer, press, and retailer standpoint. Retailers, obviously, got to see earlier versions of the game, and they were excited about the ambitiousness of what we were all trying to achieve. Gamers have really embraced the final product, and nothing beats reading rave reviews from actual players. Although our expectations were very high from the outset, with all concerned aiming to disprove the adage that movie-based games could not be triple A, the final result has even surpassed the bar that was set.

GS: What impact do you expect the game's positive reception will have on the movie's opening weekend?

CL: The narrative of the game was created to tie in to The Chronicles of Riddick and answer some questions opened by Pitch Black. Anyone who sees both the films and plays the game is going to leave with a much bigger picture of the story.

GS: Quite a few people worked on the Chronicles of Riddick game; it's obviously a team effort. How much of a role did Vin Diesel and Tigon Studios have in the development of the game, which we presume took place mostly in Sweden?

CL: The game was developed at Starbreeze Studios, working with VU Games, by a truly incredible team of guys. But our goal from the outset was to have the most collaborative working relationship between the creators of the movie and the creators of the game.

Vin and Tigon were intrinsically involved from the inception in several aspects of the game’s development. Aside from Vin obviously providing voice and likeness, we were also involved in story and dialogue development, directing cinematics, character design, additional game design, and overseeing the development from a creative standpoint. Vin knows the Riddick character better than anyone else, and he was completely involved in bringing the character’s sensibilities and persona to the experience, and I think that really comes across when you play the game.

GS: What was director David Twohy's involvement in the game?

CL: David Twohy was involved throughout the development of the game. He was involved in the story creation aspects of the game as well as providing feedback to several interim builds that he saw.

GS: What was the most valuable thing you and Tigon learned during the course of the project? What are the takeaways from the experience that you might already be applying to upcoming projects?

CL: In the 11 years that I have been involved in producing games, with many being license-based, this is the most collaborative production between Hollywood and the game industry that has ever happened. I think the final game proves that the production model we used between Tigon, VU Games, and Starbreeze works.

GS: What's next for The Chronicles of Riddick as far as games are concerned? Are there plans to bring the game to other platforms, for example?

CL: All I can say is that there are definitely several more stories from Riddick’s universe that could be told. As for bringing the game to other platforms, I can’t comment at this stage in time. 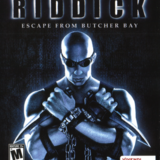 The Chronicles of Riddick: Escape From Butcher Bay
Follow

View Comments (1)
The Chronicles of Riddick: Escape From Butcher Bay