We spoke with the US producer of this PlayStation 2 racing game for details on the changes being made to the US version.

GameSpot recently conducted a Q&A with Matthew Paul, the producer at Crave Entertainment in charge of the US translation of Jet Ion GP - Hresvelgr in Japan and formerly known as Fusion GT in the US - for the PlayStation 2. Several specific tweaks are being made to the game, including a revamped reward system and a new two-player split-screen mode. The complete Q&A follows:

GameSpot: One of the problems people had with the Japanese version was the varying frame rate. Have the frame rate issues been stabilized for the US version?

Paul: We are extremely conscious of this issue and are still working with the developer to improve it further, but at this point the frame rate is totally playable.

GS: The original game had only three modes and no real hidden stuff. Are there new modes, vehicles, tracks, or features being added to Jet Ion GP?

Paul: We completely revamped the reward system so players have to win races in order to unlock most of the vehicles and weapons. Additionally, there are now some new rewards not found in the Japanese version.

It may seem limiting to force players to unlock vehicles and tracks as they play, but really this helps to balance the overall game because we know exactly what vehicles the player will start with. Some of the early reviews said that once you knew the best vehicle and weapon, you could win the entire game without even trying. This is an example of where the game needed to be better balanced, and we've fixed that.

GS: Will the US version have a two-player mode? Any multiplayer plans for the game?

Paul: We will be adding two-player split-screen play for the US version. We've got it up and running, so it will definitely be a part of the final game.

GS: Other than the frame rate, are there any other graphical enhancements being developed for the US version?

Paul: We've enhanced the tracks, added more "fireworks" as a reward when the player wins a race, and even changed the color of the tracks. We've also fixed the jagged edges and graphic flickering that I've seen in some PS2 games.

GS: When do you think the game will be ready for release in the US?

Paul: We won't release the game until we're satisfied that its quality and entertainment value is worthy of the PS2.

Although a specific date has not been set Crave expects to release Jet Ion GP on or around the launch of the PlayStation 2 console. 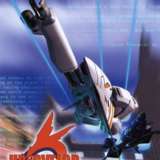