Infinite Interactive teams with Capcom and Nickelodeon on Othello-style RPG on the Wii, DS, and PC this holiday.

Infinite Interactive's puzzle/role-playing game hybrid Puzzle Quest: Challenge of the Warlords was an unexpected hit that garnered a good deal of attention last year. However, as noted by Infinite Interactive CEO Steve Fawkner during this year's Game Developers Conference, the game very nearly didn't make it to market because publishers were leery of the project's unproven style of gameplay.

Of course, success has now paved the way for duplication. Capcom said today that it has teamed up with Nickelodeon and Infinite Interactive on a Neopets-themed puzzle role-playing game. Titled Neopets: Puzzle Adventure, the game will be released on the Wii, Nintendo DS, and PC this holiday season.

Whereas Puzzle Quest--and its upcoming sequel, Puzzle Quest: Galactrix--draws its influence from Bejeweled's match-three-style gameplay, Puzzle Adventure follows the rules of Reversi (aka Othello, aka Go). After being assigned a color, players attempt to capture the majority of squares on a grid-like board by taking turns flipping one another's pieces.

Not merely a digital interpretation of the famed board game, Infinite Interactive would add its signature RPG twist. Players will be able to customize one of 12 Neopets, and then adventure on more than 150 quests through the Land of Neopia. The game also features an assortment of minigames, and players will also be able to collect bonus-conveying items and PetPets. The game will also feature cooperative and multiplayer matches.

According to Capcom, Neopets.com is "called the 'stickiest site on the web,' with its Tweener audience spending an average of three hours per week on the website." Ostensibly in an effort to make said site even stickier, Capcom hopes to tie in Neopets: Puzzle Adventure to this online portal by including the ability to earn codes in-game that can be redeemed for virtual Neopets swag through the site. 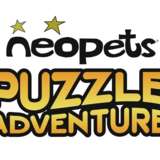