Sega's addictive puzzle game will be one of the launch titles for the N-Gage. Read our first hands-on impressions.

If Tetris is the king of all puzzle games, Puyo Pop (also known as Puyo Puyo) would be the king's most trusted advisor. Or something. At any rate, this action-packed competitive puzzle game is Japan's answer to Tetris, and it has similar gameplay but its own unique style. Versions of Puyo Pop have appeared on many platforms to date, and soon, one will be available for the Nokia N-Gage, just in time for the system's October release. We recently got our hands on a build of the game and took it through its paces, and we were pleased to find that it successfully delivers the time-honored addictive gameplay that has made Puyo Pop so, well...popular.

Granted, there's no particular reason why we should be impressed by the N-Gage version of Puyo Pop, and for the most part, we're not. This is a puzzle game we've played on and off for years now, and the N-Gage simply gives us another means by which to play it. As with a number of other N-Gage titles, Puyo Pop's most compelling feature is its wireless multiplayer support via Bluetooth technology, which allows two players (each with an N-Gage and a copy of the game) to play against each other over the airwaves. Other than that, Puyo Pop features both competitive gameplay against the AI as well as less-hectic, scenario-based puzzle action.

Puyo Pop eschews the rather humdrum production values of games like Tetris by making gameplay revolve around puyos--little multicolored blobbies with eyeballs. These are rather more interesting to look at than Tetris blocks and lend the game a cute and lighthearted feel. Some anime-style characters and upbeat music further add to the decidedly Japanese flavor. Puyo Pop is the sort of game that actually is ideally suited toward the N-Gage's vertically oriented screen. Overall, the game runs pretty smoothly and has a much better feel and presentation so far compared with the similar Puzzle Bobble Vs., another N-Gage launch title.

Despite differences in appearance, gameplay in Puyo Pop is reminiscent of Tetris (as well as games like Columns and Dr. Mario, which were inspired by the original Puyo Puyo), only more competitive in nature. Pairs of multicolored puyos drop down the screen, and you must arrange them so that like-colored puyos stick together. When four or more like-colored puyos come into contact, they all pop, you earn points, and other nearby puyos might tumble down. It's possible to create huge combos of popping puyos, and in so doing, you'll rack up huge points and also put the hurt on your opponent--landing big combos causes nasty black-colored puyos to drop on the opponent's side, and these can't easily be eliminated. The player whose screen gets filled with puyos first loses.

The time-honored gameplay of Puyo Pop translated well to the N-Gage. This should be a solid if unassuming title for the platform's early October launch. 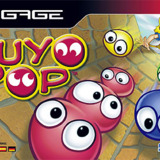