Sega will release the blob-erasing puzzle game for both handhelds on Christmas Eve.

TOKYO--Sega today announced that it will release Puyo Pop Fever for the PSP on December 24, the same release date as the Nintendo DS version. Both games will be priced at 4,800 yen ($45).

Christmas Eve isn’t exactly viewed as a strategic time to release a game in Japan--while many do celebrate the holidays, there isn't the significance attached to the night before Christmas as is the case in the West. Typically, publishers make sure to launch their end-of-the-year titles at least two days before Christmas Eve. Sega's decision to sell Puyo Pop Fever on Christmas Eve is due to the fact that the 24th of each month is officially acknowledged as “the day of Puyo” (and is legitimately registered so with the Japanese Commemoration Date Association).

If one checks all the launch dates of all of Sega’s past Puyo Pop Fever releases, you’ll notice that all have come out on the 24th of their respective months.

The PSP edition of Puyo Pop Fever allows you to play against a friend via that handheld’s wireless connection. You can also play with your friend with just one PSP since the game has a split-screen mode. You’ll be holding the handheld vertically and playing against your friend face-to-face; one player will control the game using the directional pad and the L button, while the other player will control the game using the four main buttons and the R button.

The DS edition of Puyo Pop Fever is played on the lower screen, and the game can be controlled with either the stylus pen or the traditional directional pad and buttons. By using the handheld’s wireless connection, you can play with up to seven other players simultaneously. You’ll be able to see four of the players moving around on the upper screen, while the remaining four players will play on the lower screen. 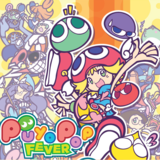