Punch King comes out fighting on the GBA

Acclaim has announced that a new boxing game named Punch King is currently in development for the Game Boy Advance. Punch King will feature 18 boxers, and they will all have their own unique style and skills. The game will also feature a career mode where players can win matches for prize money, which can then be used to purchase additional boxing combinations and special knockout moves. Those wanting to create their own boxer will have the opportunity to do so in the create-a-boxer mode. Acclaim also revealed that Punch King will have color commentary, as well as multiplayer support via the Game Boy Advance link cable.

Punch King is scheduled for release in the spring. 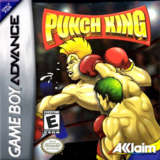