This morning at the Leipzig Games Convention, Sony Computer Entertainment Europe officially revealed the PSP-3000. Shortly thereafter, Sony Computer Entertainment America formally announced that the latest hardware revision of the PlayStation Portable would ship worldwide in October, or in roughly two months' time. In North America, the device will begin shipping to stores on October 14.

SCEA's announcement gave more concrete details about the PSP-3000 and Sony's plans for it outside Europe. The handheld is the same width as the PSP-2000, the slimmer model Sony unveiled at E3 2007, and will sport the same video output functionality. However, the new model will now output gameplay in interlaced video format compatible with non-progressive video displays.

More significant new additions to the new PSP include a redesigned LCD screen that boasts "more natural and vibrant colors" and "anti-reflection technology" to foil glare. The handheld will also sport a built-in microphone for use with the PSP's Skype functionality and voice-enabled games, eliminating the need for an external headset.

Another change visible on the PSP-3000 is the replacement of the "home" button on its front with a button bearing the PlayStation logo. The switch prompted rumors that the new PSP would sport a XrossMediaBar (XMB) which could be accessed in-game as on the PlayStation 3. However, SCEA reps said that the logo button would have the same functionality as the home button, and had no new information on when--or if--an in-game XMB would come to the PSP, as trophies are suspected of.

Sony also announced today that the new PSP would come in three colors--Piano Black, Pearl White, and Mystic Silver. The new model will replace the PSP-2000 in the $169 PSP Core Pack and in two other packs. These include the forthcoming Ratchet and Clank: Size Matters Entertainment Pack, which contains a 1GB Memory Stick Duo, an UMD copy of the film National Treasure 2: Book of Secrets, and a voucher for the downloadable title Echochrome. The PSP 4GB entertainment pack, which includes a 4GB Memory Stick Pro and a voucher for Everyday Shooter for the PS3, will also sport the PSP-3000 at its center. 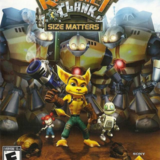