"Craft items and engage in tedious side quests."

Pocket Mortys, the Pokemon-like game based on the Adult Swim animated show Rick and Morty, is available now for iOS and Android devices. This is slightly ahead of schedule, as the game was previously pegged to debut on January 14. You can download it today on iTunes and Google Play.

Pocket Mortys is a free game, supported by microtransactions. In the game, you can collect and train more than 70 "bizarre" Mortys, including Mustache Morty, Wizard Morty, and Cronenberg Morty and more.

In Pokemon fashion, you'll build a team and challenge other players in your quest to become "the greatest Morty trainer of all space and time."

Here's a quick-hit rundown of what to expect from Pocket Mortys, pulled from the game's product page:

The show Rick and Morty features the titular characters travelling through different dimensions, often getting into trouble. This won't be the first time Rick and Morty have appeared in a video game. In August of last year, the time-travelling duo joined Dota 2 as an announcer pack. 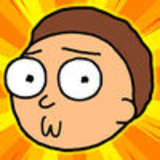