Show off those art skills to your friends once again.

When the Jackbox Party Pack launched in 2014, one of the games included in it, Drawful, quickly became a popular party game. Following its success, developer Jackbox Games has created a standalone sequel, and it's available today.

Drawful 2 is essentially the same formula as the original game; the best way to describe it is as a modification of Pictionary. But the sequel also has a few notable additions. According to the studio's website, Drawful 2 lets players create their own prompts rather than just relying on the built-in ones. It also includes 50 percent more prompts if you don't want to make your own.

In addition, the game lets you use two different colors and share your drawings as GIFs via Twitter. It also includes better support for Twitch streamers, such as the ability to censor and skip certain prompts.

I'm especially excited for the ability to draw in two colors. Now my spectacularly bad drawings can be colorful instead of just monochromatic!

If you want to get some friends together and see who can draw the worst, you can pick up Drawful 2 right now for PS4, Xbox One, and PC. It'll cost you $10 and it requires at least three people to play. You can play with up to eight people, and up to 10,000 can interact with your game via its audience feature. 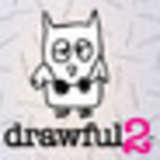