Atlus has announced a number of new Persona games today, including a pair of rhythm game spinoffs that are each dedicated to a different core, numbered entry. Persona 3 and Persona 5 are both getting the rhythm treatment, just as Persona 4 did before them.

Persona 5: Dancing Star Night features the music and characters from the most recent entry in the Persona series. The trailer below shows off the protagonist, Joker, as well as Ryuji, Ann, and Makoto dancing in locations from Persona 5, including Station Square in Shibuya and one of the early Palaces.

Similarly, Persona 3: Dancing Moon Night offers the same treatment for Persona 3. The trailer below swaps in the game's party members, including the male protagonist along with Junpei (who may be the most awkward-looking dancer of any Persona rhythm game), Yukari, and Aigis. Again, we see some of the locales from the source game, including the school rooftop and Paulownia Mall.

Dancing Star Night and Dancing Moon Night are coming to both PS4 and Vita. They'll be released simultaneously in Japan in Spring 2018. A Japanese teaser website is now online, although it doesn't offer up any additional information. There's no word yet on a western release.

Alongside these two games, Atlus has also announced a sequel to dungeon crawler Persona Q: Shadow of the Labyrinth. Like its predecessor, Persona Q2 is headed to 3DS and will apparently feature Persona 5 characters.

The Persona series--which itself is a offshoot of the Shin Megami Tensei franchise--has seen numerous spinoffs. In addition to Persona Q and a pair of fighting games, 2015 brought the rhythm game Persona 4: Dancing All Night. Word of a new Persona 5 anime was also recently announced. 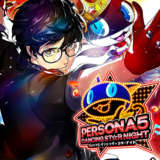