Dungeons & Dragons RPG Sword Coast Legends won't be exclusive to PC for much longer. Developers n-Space and Digital Extremes have announced that the game is coming to PlayStation 4 and Xbox One. It arrives on consoles this spring, offering an "all-new way" to play, the studios said.

The console version of Sword Coast Legends is priced at $20 and will be available as a digital-only game in the PlayStation Store and Xbox Live.

It was also confirmed that PS4 and Xbox One versions of Sword Coast Legends will get some of the post-release PC content, including a new playable sub-race (drow), more character skill trees, and new areas, among other things. Additionally, console players are getting the following in-game items:

In addition, when Sword Coast Legends' Rage of Demons expansion launches later this year, console players will get it for free.

You can click through the images in the gallery above to get a closer look at the PS4 and Xbox One versions of Sword Coast Legends. The game was originally released on PC in October 2015; GameSpot's review scored it a 6/10.

"Despite its lack of beauty and bite, Sword Coast Legends nevertheless has things going for it," reviewer Dan Griliopoulos said. "The familiar combat system works, the humor of Hommet helped me survive the quests, there's a huge amount of loot, and the critical path is solid. It may take too long to get into its stride, but it's a useful morsel to tide us over until an actual tabletop roleplay simulator arrives." 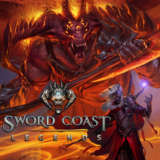