Play as a griffin or a sentient tree in this upcoming game.

The PlayStation 4 is getting a new MMO called Wander, and it varies from other games in the genre in one major way. The hook is that this game features no combat whatsoever. You can play from multiple perspectives, including a giant tree, a flying griffin, a sea creature, and more.

Writing on the PlayStation Blog, Wander writer and character designer Crystal Flinn said the game is the brainchild of developer Loki Davison, who wanted to make a game that didn't focus on violence to tell its story. Wander draws from Davison's experience traveling the world.

"I was somewhat of a nomad for a long time. I wandered around Central Asia, Siberia, the Arctic, and Himalayas," he said in a statement. "Growing up I played a lot of MUDs (text based MMO games) and wanted to make a game that was atmospheric, relaxing, and multiplayer. Wander draws on a lot of that experience. I wanted to collaboratively explore in a game."

Wander begins by putting players "deep in a forest you can't remember," and occupying a form you're not familiar with. You can piece together clues by looking at your surroundings, and also by bumping into other players who might be able to share information with you.

"During your journey you may also hear the mysterious, siren-like tones of opera singers, and following these songs will lead you to even more exciting discoveries, like the ability to change your shape and acquire new ways of exploring the world," Flinn writes.

Flinn explained that each form has "several unique and gorgeous variants," each with their own culture and backstories for you to discover. Players will also uncover "lorestones" along their journey, which will clue you in on the world of Wander and its inhabitants.

Wander will be playable at the PlayStation Experience public gaming show next month in Las Vegas. The game is scheduled to launch in March 2015, and it's also coming to PC.

Flinn also announced that there will be a Wander livestream today on Twitch starting at 4 PM Pacific. 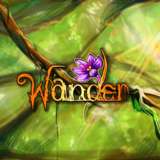