Nam 1975 will become the seventh Neo Geo game available on PS4 when it launches this week.

Neo Geo classics like Metal Slug and The King of Fighters '94 came to PlayStation 4 last year. Now, another game from that system is arriving soon on PS4: Nam 1975. It comes out on March 2.

The action game was originally released in 1990. You play as a US Special Forces soldier, fighting in the Vietnam War. Pricing was not announced for the PS4 edition in Sony's announcement, though if pricing follows from the previously released Neo Geo games, you can expect to pay $8 for it.

Nam 1975 will be the seventh Neo Geo game on PS4, following Metal Slug, The King of Fighters '94, World Heroes, Samurai Shodown, Fatal Fury, and Alpha Mission II. They are all available for $8 each.

In addition to Neo Geo games, there are a lot of PlayStation 2 games available on PS4, including Red Dead Revolver, Psychonauts, and Twisted Metal Black, among others. 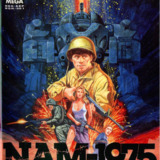