Square Enix announced today that action-RPG Dragon Quest Heroes will be released in the West. Previously, the game was confirmed only for a launch in Japan, where it arrives tomorrow, February 26.

Dragon Quest Heroes will arrive in North America exclusively for PlayStation 4 later this year. A disc-based version will be available at retail, while you'll also be able to download a digital version through the PlayStation Store. Pricing was not announced.

In Dragon Quest Heroes, players must "rise up against insurmountable odds, challenging swarms of enemies and conquering gigantic monsters in an exhilarating action game," according to Square Enix.

The game's characters were designed by Akira Toriyama, an artist known for his work on the Dragon Ball and Chrono Trigger franchises. Dragon Quest creator Yuji Horii and veteran series composer Koichi Sugiyama are also working on Dragon Quest Heroes.

The game was co-developed by Square Enix, Omega Force, and Koei Tecmo.

In Japan, Sony will release a special edition "Metal Slime" PS4 to mark the launch of Dragon Quest Heroes. No plans have been announced to release this console in the West.

Square Enix teased that it will have "loads more details" about the Western release of Dragon Quest Heroes in the coming months. 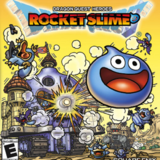