Dinosaur shooter Primal Carnage: Extinction, released earlier this year on PC, will launch for PlayStation 4 on October 20. Developer Panic Button announced the release date today in a post on the PlayStation Blog. Check out the game's launch trailer below.

Extinction is a class-based shooter where you can play as either a human or a dinosaur, fighting against the other side. Dinosaur types include the Dilophosaurus, Novaraptor, Pteranodon, Carnotaurus, and Tyrannosaurus Rex. On the human team, you can play as a Scientist, Commando, Pathfinder, Trapper, and Pyro. Full descriptions of each are available on the PlayStation Blog.

The multiplayer shooter supports up to 16 simultaneous players via online multiplayer or locally through LAN play. There are four different modes in Extinction. Courtesy of Panic Button, they are:

Extinction takes the place of Primal Carnage: Genesis, which was a single-player game. This project was put on hold back in October 2014. Extinction has not been announced for Xbox One.

The original Primal Carnage was released in 2012 for PC. 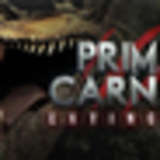