Bandai Namco, the publisher behind Dragon Ball FighterZ, Ni No Kuni, and the Dark Souls series, has announced a new My Hero Academia video game. Titled My Hero Academia: One's Justice, the game will come to Nintendo Switch and PlayStation 4.

A teaser website has been live for the game for some time, but right now simply shows a grenade rolling out of a microwave and a countdown with four days left to go. However, Japanese manga publication Weekly Jump (translated by Gematsu) has confirmed the game exists. No other details have yet been revealed for the adaptation; we don't yet know what kind of game it will be, when it will launch, or if it will come to other platforms. We will likely learn more when the game's first trailer drops on December 16.

My Hero Academia started as a manga series in Japan in 2014. It has since been adapted into an anime, which along with the manga has been critically acclaimed. A third season of the anime is coming soon, with eight volumes of the manga already available.

The franchise has already received one video game, titled My Hero Academia: Battle for All. This was released on 3DS in 2016, though never made it to the West. Let's hope One's Justice does make it out of Japan when it launches for Switch and PS4. 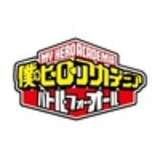