With wrists straight, heads down, and legs firm, we dive into the authentic swing mechanics of this upstart golf game.

The golf swing has gone through plenty of permutations in the video game world over the years. From two- and three-click systems with a mouse or game controller to moving your mouse back and forth on your PC to simulate a golf swing, there has been no shortage of variety when it comes to emulating that most complex of sporting activities. With the upcoming release of ProStroke Golf for the PlayStation 2, Xbox, and PC (as well as a PlayStation Portable release due after the console games drop), you can add one more flavor of video game golf swing to the mix. Today we got a chance to take hack around a course or two with a work-in-progress version of the game.

As we found in our initial look at ProStroke Golf, the swing mechanic in the game is unlike anything you might be used to in other golf series. Instead of having you watch your player swing from a third-person perspective, ProStroke Golf (formerly known as World Tour Golf) gives you a firsthand perspective over the ball. While your swing takes place directly over the ball, you can choose to look up from your swing or zoom straight to your placement cursor if you wish. Just as a golf swing in real life is a right-to-left movement (for right-handers), so too is it in ProStroke. To make a shot, you simply move the right analog stick from right to left in one smooth motion. We say "simply," but, as with the real thing, a successful golf swing in ProStroke depends on a number of crucial factors.

As for the swing itself, smoothness is the key. Pausing at the peak of your backswing or moving back and forth too quickly isn't recommended; instead, you want to strive for one smooth, pendulumlike movement from your backswing all the way through your follow-through. Still, even with the smoothest swing around, you won't get the most out of your driver and long-irons unless you put some weight behind your shot--specifically, your body weight. By moving back and forth on the left analog stick, you can shift your weight backward or forward; to get the maximum power out of a drive, for example, you want to shift your weight forward slightly before you make contact with the ball on the downstroke. The delicate timing takes some getting used to--and there's always the risk your bad shot might turn into a disastrous one--but those extra yards off the tee are often worth the gamble.

And then there's the stance. Where you place the ball in your stance, and how you position your feet, has a big effect on how the ball will travel once it's struck--and you'll be able to adjust practically every detail of your stance before the swing. Moving up or down with the left stick, for example, will either open or close your club face which, in turn, will fade or draw the ball. The directional pad on the PS2 or Xbox controller is used for making stance adjustments--move it left or right to bring the ball back or up in your stance (thus adding or subtracting loft). Pressing up or down on the D pad moves your left foot either forward or back, which also affects the curve of the ball. A handy shot-shaper button (triangle on the PS2, Y on the Xbox) will give you a quick idea of how any adjustment in your stance will affect your shot before you swing.

So, taking all of these variables into account, it's possible to hit a lob shot off your back foot with a slight fade by opening the club, all the while leaning into your shot for extra power and making sure the swing itself is as smooth as possible. Provided you've got the patience--and the fine motor skills to boot--ProStroke Golf's shot controls really aim at an authentic representation of the sport's most essential skill. One thing we noticed right away was how easy it was to compensate for awkward shots (such as on a slope or in a trap) using the game's controls. Using the shot-shaper feature, you can get a good idea of which direction the ball will head once you hit it, and adjust your club face or stance to compensate beforehand.

Of course, mastery of the game's controls also depend on at least a rudimentary knowledge of golf. For those who have never hit the real links before, the game does provide a tutorial that not only shows you the controls of the game, but how they revolve around the real fundamentals of a golf swing. It might be a stretch to say that ProStroke Golf will improve your real-life golf game--only real practice will do that--but, if you go through the tutorial and absorb the contents, you'll at least have a better idea of the different things you can do with a swing.

Beyond the tutorial and basic "play now" mode, ProStroke includes a tournament mode and a career mode. The career mode will follow a calendar, and you'll be playing multiple tournaments against increasingly challenging computer-controlled opponents in the process. Along the way, you'll earn renown points for pulling off challenges in the game, such as hitting a particularly long drives or sinking long putts. There are also individual challenges you can schedule to earn even more renown. Using renown points, you can unlock new courses and golfers in the game. You'll also earn money for tournament wins, which will be used as entry fees for new tournaments and, eventually, for your rookie golfer to go pro. Unfortunately, that's pretty much all you use cash for--the game won't include new clubs, accessories, or clothing to purchase.

The course designer is the final element of the ProStroke Golf package. In addition to being able to edit any hole found in the game's 18 courses, you'll be able to whip up a new course from scratch, editing fairways and adding obstacles such as trees, walls, and water hazards, and then save your creation to a memory card or hard drive. In the case of the PC game, you'll be able to upload and download created courses to your hard drive and play them whenever you like. We haven't had a ton of time to mess with the course designer yet, but from the looks of it, the tool seems relatively flexible and easy to use.

With pro golfers such as Ian Woosnam, Sergio Garcia, and Mark O'Meara appearing in the game and a host of courses (both real and fictional) to play, ProStroke Golf is looking to be a golf game with the focus firmly on authenticity. A lack of online play is a bummer but, if the game's interesting swing mechanics are any indication, ProStroke Golf's single-player game should keep virtual duffers busy for quite a while. The game is due for release later this year. 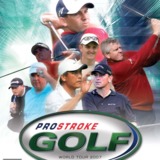