The game, set in Melbourne, Australia, is about a cafe where the dead can return to life for one night.

Necrobarista, a long-awaited visual novel with a lot of style and an anime-inspired aesthetic, has finally confirmed a PC release date--and it's close. The game will release for Steam and GOG on July 22, while console players will have to wait a bit longer--a Switch and PS4 release is planned for 2021.

The game is set in Melbourne, Australia, and features full 3D environments and characters to explore in first-person, and it's aiming for a cinematic feel. It's set in a cafe where the dead are able to return and interact with the living--but only for one night.

The soundtrack has been composed by Kevin Penkin, who previously worked on Florence.

In 2019, the game made GameSpot's round-up of the best games of PAX Australia. It is being translated into thirteen languages beyond English, too, including Korean, Arabic, and Russian.

The game's Steam page also promises an appearance from Australian bushranger and icon Ned Kelly, which should be interesting. 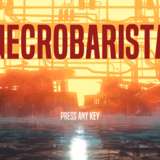