Namco announces the official title for Project Venus on the PlayStation 2.

Comments
Namco has announced its official title for Project Venus on the PlayStation 2. Titled Venus and Braves, the game is the follow-up to the simulation role-playing game Seven: Mallmorse's Cavalry Unit, which was released last year in Japan. No release date or price point has been announced, but in the meantime, check out the latest trailer from the official Web site. 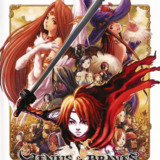 Venus & Braves: Majo to Megami to Horobi no Yogen
Follow