Level-5, the creator of the Professor Layton series, recently announced the release date of its upcoming game Time Travelers. The visual novel adventure title will be out on July 12 in Japan for the PS Vita, PSP, and 3DS.

The physical versions of the game will cost gamers 5,980 yen ($75), while the PSP and PS Vita downloadable versions will set them back 4,980 yen ($62). The narrative is set in the year 2031 in Tokyo, when the city has become a futuristic utopia that is powered by a 2,000-meter-tall construction called the Space Elevator. Players control five different characters whose stories will tie in together thanks to a student named Mikoto who can predict future events in the current timeline.

The platforms for the upcoming adventure game were announced last year during Level-5's world press conference. Level-5 has yet to announce whether the game will be localized for North American and European markets. 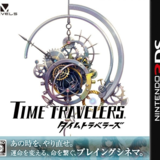