Find out what to expect from Konami's latest soccer title.

Pro Evolution Soccer is the latest in a series that has evolved over the past few years into what is undoubtedly the greatest virtual re-creation of the sport to date. Based on the Winning Eleven 5 game engine, Pro Evolution Soccer looks set to once again raise the bar, delivering a gaming experience against which all others will be judged. Gameplay is what the series is renowned for, but this latest incarnation places just as much emphasis on visuals, putting it on par with, if not above, Electronic Arts' FIFA series in terms of presentation--one area in which the latter has always excelled.

The player animations have been measurably improved, with all-new falling, dribbling, and running animations added to an already impressive array of jukes, turns, shots, and passes. The stadiums and crowds are immaculately rendered and stunningly realistic. Flares send smoke spiraling into the heavens, while stadium roofs cast shadows onto the pitch. Multitiered stadiums only add to the spectacle, creating a sense of awe and anticipation that seems about as close to the real thing as possible.

Not all is perfect, however. While the players bear a remarkable resemblance to their real-life counterparts, they can at times appear awkward, a fact reinforced by a number of wayward polygons and jagged edges. Admittedly, these are only really seen in replays, but they are noticeable. One very cool addition is a highlight reel that is shown at the end of the game, detailing some of the cooler moments from the past 90 minutes of football (as the sport is known in the rest of the world). Longtime fans of the series will be pleased to hear that the game will include the FIFPro license, ensuring that a good portion of the players in the game sport real names, instead of the laughable imitations found in earlier versions. The game features 32 club teams from various leagues around the world and approximately 50 international teams, providing even the most fickle of players with a suitable selection.

All these minor touches are merely icing on the cake. Gameplay has always been king in Konami's well-loved series, and Pro Evolution Soccer looks to continue that trend. Goalkeepers are reportedly much smarter this time around, actually saving headers on occasion and not letting in quite as many howlers as past iterations in the series. In terms of shooting and passing, little seems to have changed, which is, of course, a good thing. Lobbed shots can still be performed by either double-tapping shoot or pressing L1 in conjunction with the shoot button. Players run even more intelligently off the ball than before, and the ball itself seems to react more unpredictably than ever--rolling through players' legs, ricocheting off defenders, and even occasionally bouncing favorably (some would say luckily) for a player.

Scoring is no simple affair, requiring equal doses of strategy, planning, and skill. Charging blindly toward an opponent's goal area will usually result in the player being dispossessed. Intelligent passing, individual skill, and a little touch of magic are the ingredients for success, making the act of scoring a truly enjoyable moment instead of a routine formality. Blasting a 30-yard strike home is just as satisfying as a well-worked play, as are the many other methods of scoring, be they skilful runs through the midfield or fortunate deflections off a defender.

Support for up to eight players will make this a party favorite among sports fanatics. As has become customary over the last few years, Pro Evolution Soccer doesn't offer anything wildly different from its predecessors. A complete graphical overhaul and a few minor gameplay refinements should prove incentive enough to pick this game up when it debuts in Europe later this month, though. Although not officially announced, a US release in the coming months is very likely. 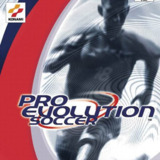