The creator of Prince of Persia is ready to develop his first game since 2003's critically acclaimed Sands of Time. Jordan Mechner today confirmed that he is remaking his breakthrough 1984 hit, Karateka, for release as a downloadable game for the Xbox 360 and PlayStation 3 later this year.

Developed by Mechner in his dorm room at Yale, the original Karateka cast players as a karate fighter who takes on the warlord Akuma to free the kidnapped maiden Mariko. The bulk of the game consists of one-on-one fights between the player and Akuma's henchmen as the protagonist makes his way further into Akuma's fortress.

"Making the original Karateka was a labor of love," Mechner said in announcing the new version. "To have so many people embrace it and share their stories of playing it has been really rewarding. I am always surprised to hear how much impact that game had. In remaking Karateka, I want to honor the original game with a compact, pick-up-and-play game that is fluid, atmospheric, and beautiful."

Mechner answered some of GameSpot's questions to shed more light on how he will be approaching the remake of his Apple II original.

Jordan Mechner: I'm not sure why, but I've felt especially connected lately to the early 1980s and a lot of different things just seemed to be pushing me in that direction. I just published my old game development journals as a book, and certainly rereading those old journals made me think about Karateka.

Even in 2010 on the Disney/Bruckheimer Prince of Persia movie press junket, with these huge stars and everything there was to talk about, people were fascinated by the original Apple II era and kept asking me about it, and about Karateka, which somehow they still remember. Between screenwriting and writing for TV and graphic novels these past few years, it's been too long since I've gotten hands-on with a game--Prince of Persia: The Sands of Time was the last one--and doing a new indie Karateka as a downloadable game seemed like the perfect way to get back to my roots as a game designer.

GS: What do you think the biggest differences between the new Karateka and the original will be?

JM: The visuals and sound of the new game...the style of cinematic storytelling was something I really wanted to focus on. When I did the original Karateka back in the '80s, there was only so much I could do with the music and art direction given the technical limitations of the Apple II. Today, the sky is the limit. So the new Karateka will be a much more beautiful, immersive experience.

On a gameplay level, we've reinvented the controls and combat mechanic to a degree because of the expectations of gamers--and where we draw the line between fun and frustrating--have evolved so much in the last 30 years. The original Karateka was notorious for its relentless difficulty and especially for certain unexpected sudden-death surprises that made you go back and replay the whole game over from the beginning.

That "one life" philosophy wouldn't go over well today. But it was my way of not wanting to break the player's immersion in the fiction. In a story, the hero can only die once, right? That was the conundrum that led us to create the Dagger of Time and the rewind feature in Prince of Persia: The Sands of Time; it was a way to allow the player to fail in a life-and-death situation and still keep playing without breaking the reality of the story. For the new Karateka, we've come up with a new way to handle the problem of defeat that ties into the story and is true to the spirit of Karateka. I hope players will enjoy it and also be a bit surprised.

GS: Could we see this come to PC, mobiles, or handhelds?

JM: We might consider additional platforms down the road, but right now, we are focused on XBLA and the PSN. The opportunity to create a downloadable experience for these platforms is very exciting. They're perfect for the compact, pick-up-and-play experience that defines Karateka (old and new).

GS: What do you think of the fighting genre's evolution since Karateka? Any franchises you think have really done it right?

JM: Even though Karateka helped jump-start the fighting game genre back in 1984, I actually never thought of it as a "fighting" game. To me, Karateka is a story-driven action adventure game that uses karate battles as a means of advancing the plot. In terms of their evolution, I think of modern fighting-game franchises like Tekken and Mortal Kombat as among the last true "arcade-style" games that have stood the test of time. Karateka is a different kind of game.

GS: Why have you stepped away from day-to-day development since Sands of Time? Why come back now?

JM: Between the demands of the Prince of Persia film and my other screenwriting, TV, and graphic novel projects, the last few years have been a very busy, exciting and rewarding time. It's not that I wanted to get away from games; it's that I love all these different art forms equally. For me, they're all ways of creating a world, an experience and sharing it with an audience. I felt it was time for me to do another game; I was intrigued by the challenge of making a downloadable game with a smaller team, and Karateka was a perfect opportunity. The time is right. 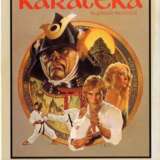