25 years later, 1989's classic puzzle game and its never-before-seen sequel will be released on Steam in May.

It's been more than 25 years since the original Chip's Challenge, an addicting tile-based puzzle game developed by Chuck Sommerville, was released back in 1989 for Windows 3.1 and Atari Lynx. But now the original, and its previously unreleased sequel, are coming to Steam--and soon.

As for why Chip's Challenge 2 was never released, Sommerville says the game's original trademark was sold to another company, which asked him to fund the publishing of the game. He says he couldn't afford to do this, and had to shelve the game.

“When I couldn't release Chip's Challenge 2, it hit me really hard," Sommerville said in a statement. "Not only had I spent two years perfecting it, I also felt I'd let down the fans too. I generally thought the only way Chip's Challenge 2 was ever going to see the light of day was by having my wife leak it on the Internet on my death."

But it doesn't have to come to that, as the game is finally coming out of the shadows. Chip's Challenge 2 delivers 200 new levels and packs in 79 additional total game elements, including more abilities and monsters. In addition, you get to play as the hero of the first game, Chip, as well as his girlfriend Melinda.

A trailer for Chip's Challenge 2 is above.

I played so much Chip's Challenge growing up and am eager to try the sequel. What about you? Let us know in the comments below! 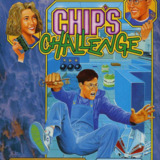