Eidos launches an official site for its upcoming real-time strategy game based on the campaigns of Julius Caesar.

Eidos Interactive has launched the official Web site for Pyro Studios' Praetorians. The real-time strategy game, which is scheduled for release in both North America and Europe next month, sees players assuming the role of a Roman general under Julius Caesar and commanding vast armies against the natives of the deserts of Egypt and the frozen lands of the Gauls.

The official site--which can be viewed in English, German, French, or Spanish--features sections covering the game's story, features, environments, multiplayer modes, and civilizations. There are also trailers, wallpapers, screenshots, a screensaver, and a demo available for download.

For more information on Praetorians, check out our previous coverage of the game. 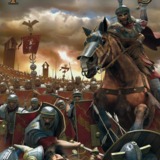