Konami of Europe announces that it will release Yu-Gi-Oh! Power of Chaos: Kaiba the Revenge for the PC in March.

Power of Chaos: Kaiba the Revenge will feature more than 300 new cards to collect, and it will see players battling in areas of the Kaiba Corporation that will be instantly recognizable to fans of the TV show. As players take on the CPU-controlled Kaiba, they'll also notice that the opponent AI has been improved since Yugi the Destiny was released.

Retail copies of Yu-Gi-Oh! Power of Chaos: Kaiba the Revenge will ship with three limited edition official trading cards, and Konami has stated that further Yu-Gi-Oh! titles for the PC will follow throughout 2004. We'll bring you more information as soon as it becomes available. 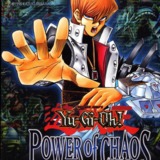