For its first game without its founder, Bullfrog returns to the series which made it famous

When I was hired as a copy editor at a computer games magazine back in 1990, one of the first pieces that crossed my desk was a strategy guide for a game called Populous. The name struck me as odd, but as I read on my interest was piqued: This game gave you the powers of a god, allowing you to flatten and raise land, call up volcanoes, unleash floods, and perform other feats worthy of a deity, all in order to cause your "people" to worship you and provide you with more power. Once your followers had increased in numbers, you could march them across the terrain and lay waste to the villages occupied by the other people on the world - the ones who worshiped the other deity. After you smashed them to nothingness, you were taken to a completely new world and to begin the process once more against an even stronger deity.

Just by reading that description, I knew this was my meat. That same night I snatched a copy of the game off an editor's desk and baptized my new PC with its first game - and it was only a couple of weeks later that I bothered to even look for another game to install.

As you probably already know, Populous was a huge hit - millions of copies have been sold, and heaven knows how many people have pirated the thing over the years - and its influence quickly spread far and wide: Before long "mana" was a common phrase for a source of power, "god game" had become part of the PC gaming vernacular, and developers everywhere were struggling to create a game that had the universal appeal of this classic design. But few if any designers were up to the challenge; even Bullfrog, the development house that created Populous for Electronic Arts, had difficulty duplicating the feat. Both PowerMonger, a game with strong similarities to Populous, and Populous II failed to satisfy critics and players the way the Populous had.

It's been eight years since Populous was released, and four or five since Populous II - but finally the wait is ending. Bullfrog is nearing completion of Populous: The Third Coming, and the expectations of veteran and novice gamers across the globe are starting to reach a fevered pitch. But why did Bullfrog wait so long before beginning work on this game? The pat answer, of course, would be that Bullfrog's been pretty busy producing other hit games, such as its classic Magic Carpet and Syndicate titles, as well as the more recent Dungeon Keeper. Still, Populous was its breakthrough game, its moneymaker, and so it's only natural to wonder why so much time has passed without a new Populous game.

Which brings us to the real reason for the delay: the desire to create something as special as the original Populous. "Bullfrog prides itself on originality and pushing technology to its maximum," says Andy Wright, team leader on The Third Coming. "When we do a sequel, we like to add a lot to the original game instead of just writing a new set of levels. Also, I suppose it's fair to say that we were waiting for a base machine spec that would do justice to a new version of Populous."

And you can rest assured this is indeed a new version of Populous. Where the original game limited you to a single isometric view, The Third Coming gives you multiple views of a spherical world, and you can rotate that view along any axis. Move in close to examine how your people are faring, and the curved horizon and lush terrain graphics will remind you of Magic Carpet (yes, that's a good thing) - or zoom out and see the entire world floating in space. Now that's the way a real god sees a planet, right? (To really see the game it in all its glory Wright recommends a Pentium-166 with Direct3D support, as well as hardware acceleration to see true-color graphics.)

While the goal of the game is still the same, how you go about mastering achieving it has been totally rethought. Instead of controlling your people indirectly by providing suitable terrain for them to build on (and doing as much as possible to prevent the opposing deity from doing likewise), The Third Coming gives you much greater control over your people's actions. As Wright points out, "The Third Coming has both more and less direct control of the environment compared to its prequels. It was generally felt that players wanted more control over their population, so direct people control was implemented." For players who sometimes wished they could reach down and split up little people into whatever size groups they wanted, this is an entirely welcome change. But though you have more control over the people, you now manipulate the landscape in a more indirect fashion - by unleashing spells. "We felt that with the change of the landscape engine from the very technical isometric view to the fully 3-D naturalistic environment, direct manipulation of the landscape would not be so effective," Wright says. "So all player landscape manipulation is now performed indirectly, via spells."

Considering that you can now control your people directly to help them evolve into different types (brave, preacher, warrior, super warrior, and so on), that the action takes place in real time, and that you watch your followers build increasingly complex settlements, comparisons to games such as Civilization and even Command & Conquer are inevitable. Wright agrees there are some similarities, but points out that they're mainly cosmetic. "The idea that you want to build an impressive looking settlement does compare with Civilization, as does the feeling of pride you get in building it up and seeing it working well," he says, "and the fact that you have direct control over you people does instantly bring about comparisons with C&C. But on further examination you realize that the people in Populous: The Third Coming have far more intelligence. In C&C, you build up your base yourself; in Populous: The Third Coming, if you don't have enough residential buildings for your people, they will go off and build them themselves. And of course the fact that you can completely change the landscape in Populous is totally different to those two games. This, coupled with the huge range of spells, adds a whole level of gameplay not found in those titles."

The graphics work in Populous is excellent, especially the terrain, and will certainly receive accolades when it's released. But ask Wright which feature of The Third Coming he's most proud of, and his answer is immediate. "The feature that you're most proud of has to be the one that was most difficult to achieve," he says, "and therefore it must be the computer intelligence. Without a doubt, programming the computer player has proven the most difficult task we faced. We've tried to incorporate as many strategies as possible - strategies that we have discovered playing multiplayer games and would like to see used against us in single-player mode."

In the multiplayer game (which will support up to four players) all spells, buildings, and people types can be made available. You might think this would lead a Third Coming version of the famous C&C tank rush, but Wright notes wryly that this isn't the case at all. "It may not be the best thing to simply build an army as quickly as possible and rush in to attack," he notes. "The power of the spells means that more thought has to be given, more strategy employed - but naturally the overall goal is still to kill everyone else." The only remaining piece of the multiplayer game is Net play: as the release date draws ever close, it's unclear whether Net play will be in the initial release or be made available later as an add-on or patch.

Eager fans will have to wait until October to put The Third Coming to the ultimate test. 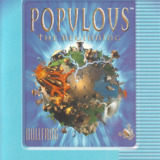