MOBA gameplay on the Switch.

As one of the early MOBA games on mobile platforms, Tencent's Arena of Valor has steadily become one of the most popular competitive games on the planet. Known as Kings of Glory in China, the mobile multiplayer-online-battle-arena game brings players together in 5v5 competitions to capture territory and defeat enemies as they level up and gain new powers for their chosen hero. In the years since its 2015 debt, Arena of Valor has launched in the US and has become one of the highest grossing games on the app store, even finding further success as an esports event game. Moreover, Arena of Valor has also seen some surprising crossovers happen with the appearance of DC comic book characters such as Batman, The Flash, Wonder Woman, The Joker, and Superman.

Arena of Valor has grown considerably over the years, and this year it will make its next big move as it debuts on the Nintendo Switch, continuing the game's on-the-go tradition. We recently got to try out the game on the Switch, and it definitely feels like a more upgraded take on the game's fast and dynamic MOBA gameplay. The Switch port of Arena of Valor will get a whole new set of features, including a new customizable control scheme utilizing the Joy-Cons, improved graphics and performance, and all content from the current version of the mobile game. The title is set for release sometime this fall, but an upcoming closed beta will allow players to get a taste of what's to come for the Switch version.

The closed beta runs from June 28 to July 12. In it, you'll be able to take part in single-player (against AI) and online matches with the game's roster of more than 30 heroes--sans DC Comic characters, unfortunately. Primarily, the developers will focus on improving the game's online and technical performances. While the beta currently runs at 45 frames-per-second and at 900p resolution, the studio is aiming to reach 60 frames-per-second and 1080p for the full release later this year. This is the second beta for Arena of Valor on Switch; the previous one, however, was only held in Europe. The upcoming closed beta will mark the first time both US and European players will be able to participate in the beta.

The developers have been working closely with Nintendo on the Switch port, which they plan to have stand alongside the mobile version. For its full release, the Switch version of Arena of Valor will have a full roster of heroes and other content currently available in the mobile version--along with all its own unique upgrades. However, both the console and mobile releases will focus on maintaining separate eco-systems, which will prevent cross-play between players on different platforms. The lack of cross-play was a conscious choice on the part of the developers, as they believed that the Switch's growing player-base would need its own separate pool to grow organically alongside the mobile audience.

As the first MOBA game on Switch, Arena of Valor plans to carry on the fast-paced competitive gameplay and action from the original game for its new platform. With more than 200 million active players globally, the launch on Switch--which has seen record breaking success in its first year--could be another win for Tencent and its popular MOBA game. To sign up for the beta, you can apply online at this link. 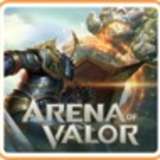