In February, Xbox Live Arcade general manager Greg Canessa left Microsoft to join with casual-game titan PopCap Games. Speaking with GameSpot, Canessa said that what he hoped to bring to the broad-appeal game publisher and developer was a focus on moving PopCap's games onto consoles and handhelds.

That partnership now seems to be bearing fruit. PopCap announced today its first retail offerings, PopCap Arcade Volume 1 for the Xbox 360, and PopCap Hits Volume 1 for the PlayStation 2. PopCap Arcade Volume 1 compiles four of the casual-game maker's hits already available over Xbox Live--Bejeweled 2, AstroPop, Feeding Frenzy, and Zuma--and retails for $29.99. PopCap Hits Volume 1 brings PopCap's offerings to the PS2 for the first time. Bejeweled 2 and AstroPop are included in this compilation, which will retail for $19.95. 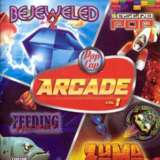