The popular Japanese arcade game series finally crosses the Pacific and finds a home on the Nintendo Wii.

The rhythm games just keep on coming, but Pop 'n Music isn't exactly something new. This music series has been around in Japan since 1998 and will be appearing in North America for the first time on the Nintendo Wii. It's like Dance Dance Revolution except with your hands (and your heart rate won't go up that much), but Pop 'n Music has a catchier set of songs to groove to.

Who's Making This Game: Pop 'n Music comes from Bemani, Konami's music video game division, and it will be published by Konami in North America.

What The Game Looks Like: It's colorful, cheery, and very quirky with its cast of characters. There will be Mii support as well, so you can have your Mii friends dance along in the background while you play.

What There Is To Do: You can sing along with the songs if you want, but generally you'll be moving the controller up, down, left, and right to the beat, which is designated by colored balls falling from the sky.

How The Game Is Played: You play as one of the 14 wacky characters in the game who are seated behind a table lined with colored buttons. Smiling balls will slowly drop from the top of the screen, and using your Wii Remote and Nunchuk, you get your character to tap the corresponding button as they approach--think whack-a-mole but with music. Like in DDR, your timing will determine what kind of score you get.

What They Say: Pop'n Music will bring a smile to kids as they move their controllers and their hips to the music!

What We Say: We're not sure how much hip movement will be involved, but there will definitely be some crazy arm movement. We waved our arms frantically to songs like "ABC" from The Jackson 5 and "Waiting for Tonight" by Jennifer Lopez. The music has been rerecorded, so it's not going to sound exactly like what you remember. The controls don't feel as accurate as they should, and given that your hands react must faster than your feet, this game should be a lot easier than DDR. We came across some issues trying to tap the right button, even though we were moving the controller in the direction that it indicated. To solve this, we started to randomly shake our controller in all directions, which at least gave us some points so that we didn't miss the beat entirely.

Downloadable songs will be available through the Nintendo Wi-Fi Connection, so there's a good supply of music for those who get tired of the tracks that come with the game. We had an opportunity to play through only a couple of songs, so we'll have to wait until next time before seeing what other features the game has, including multiplayer. We don't have a release date yet for Pop 'n Music, but it is scheduled to be released exclusively on the Nintendo Wii. 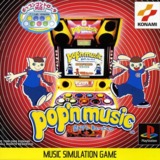