Numskull Designs chose something a little bit different for its latest arcade recreation: recreating a game that never existed at all.

Polybius is one of the greatest urban legends in video games, and it has persisted for decades despite no evidence of the arcade cabinet ever existing ... aside from an homage bearing the same name. As the story goes, a machine from a company called Sinneslöschen was placed in a single arcade in Portland, Oregon in the early '80s, but it was quickly removed after putting players into a hypnotic trance. Despite the game not being real, Numskull Designs took it upon itself to create a quarter-scale Polybius arcade cabinet to honor the mythos.

Created by the same company behind other quarter-scale arcade cabinets such as Galaga, Pac-Man, and Space Invaders, the Polybius cabinet's design is based on internet images and rumors that have been swirling for years. The bubble-like lettering can be seen in "leaked" images, and its simple and imposing design seems like something a government agency would create when looking to brainwash people into becoming sleeper agents or whatever else conspiracy theorists have dreamed up.

Numskull Designs didn't create a game from scratch for the Polybius cabinet. Instead, it displays a startup screen bearing the Sinneslöschen name and then plays a series of mesmerizing images and sounds. It also sports 10 USB ports on the back so that you can use it to power any other quarter-arcade machines you have in your collection.

Despite the small size, the Polybius cabinet features a full LED backlit marquee, a built-in speaker with volume control, and a full-color display. The Kickstarter campaign is currently a little more than 70% funded with a few weeks remaining (it interested me enough to back it) and rewards include the cabinet itself, a hat, and enamel pins. You can check out the rest of the lineup at the official Numskull website. A special 40th Anniversary Edition Pac-Man cabinet is also available. 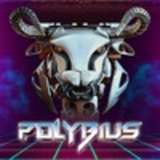