We check out the import of Nintendo's upcoming GameCube game that enhances the recent Pokémon games for the Game Boy Advance.

Pokémon Box is a GameCube supplement to the Game Boy Advance games that allows Pokémon enthusiasts to manage their menagerie of creatures. The title is not a traditional game per se, but it features a variety of options focused on the Ruby and Sapphire GBA games. In order to use the game you'll need a copy of Ruby or Sapphire with a game save, a GBA-to-GC link cable, and a GameCube memory card 59. As luck would have it, Pokémon Box comes bundled with a special red-and-blue-tinted memory card 59 that you'll need when you start to use the various features.

When you first fire up Pokémon Box Ruby and Sapphire you'll come to a title screen that will prompt you to create a save file on your memory card--the save data requires an entire memory card 59, so kudos to Nintendo for including one. Once you've sorted that out, you'll have to connect your GBA to the second controller port with the link cable. You'll then be able to take advantage of the two menu options. The first option will start a data exchange with the GBA game and offer a variety of options for sorting through your Pokémon and transferring them between the GBA and GC. You'll be able to interact with and organize your burgeoning menagerie of critters, up to 1,500 according to the literature, and perform such fun activities as mating your Pokémon. It will be possible to acquire some unique Pokémon as well. The second option functions as a GBA player and lets you play Ruby or Sapphire after a data transfer. In addition to playing the game on your television, you'll be able to toggle on onscreen menu, which has an option to let you take pictures of the screen. Once you've taken a picture you'll be able to apply different filters to your shot. The game is pretty Japanese intensive, so anyone looking to import it should wait until the localized version hits the US later this year, especially since the software won't recognize US game saves.

The game is bundled with a disc featuring a Viewtiful Joe demo, screens and movies of Final Fantasy: Crystal Chronicles, and Tales of Symphonia. The disc also contains a list of software releases that can be sorted by genre. There's no word on what the US game will be coming with, but we expect that, at the very least, it should come with a memory card much like Animal Crossing did. Look for more on Pokémon Box in the coming months. 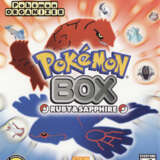