No word yet on a release for other regions.

Acclaimed Pokemon spinoff Pokemon Snap, originally released for the Nintendo 64 in 1999, is coming to the Wii U virtual console in Japan, Nintendo has announced. It will be released in the island nation on April 4, priced at ¥1,028 yen, which is roughly $9.

There is no word yet on if Pokemon Snap will come to the Wii U Virtual Console in other regions.

For those unaware, Pokemon Snap sends players on a virtual trip to Pokemon Island where they go on a safari to take pictures of Pokemon in their natural habitat. Things like weather effects, environmental considerations, and the shyness of some Pokemon makes snapping pictures trickier than you'd imagine.

After snapping shots of Pokemon in the wild, players send them to Professor Oak, who judges the photos on the basis of size, pose, technique, and the number of creatures captured.

The new Wii U version of the single-player game supports GamePad, Classic Controller Pro, or the Wii U Pro Controller (via Game Informer).

Pokemon Snap is already available for the original Wii's Virtual Console, priced at $10. 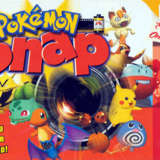