Wii U action game hitting eShop next month for $18; optional NFC figures will be sold at GameStop for $4 each.

The Pokemon Company and Nintendo announced today that Pokemon Rumble U will launch August 29 in the Wii U eShop for $18. The game will not be sold at retail.

It is the first Pokemon game exclusively for the Wii U and the first Wii U title to feature near-field communication figures. The physical toys, optional for gameplay, will be sold exclusively at GameStop for $4 each.

A total of 18 Pokemon toys will be available for purchase, including Pikachu, Victini, Deoxys, Eevee, and Genesect.

Similar to Activision's Skylanders series, the toys will link up with Pokemon Rumble U through the Wii U GamePad. The toys can save in-game data, allowing players to take them wherever they go while keeping their statistics intact.

Pokemon Rumble U features all 649 Pokemon from Pokemon Black 2 and Pokemon White 2 and sports single-player and multiplayer modes.

Activision's Skylanders series has made over $1 billion and sold over 100 million toys. The third game in the series, Skylanders Swap Force, is due for release this fall.

Disney is also working on its own similar title, Disney Infinity, for release on the Xbox 360, PlayStation 3, PC, Wii, 3DS, and Wii U in August. 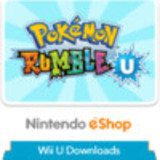