Pokemon preorders get skin for 'Cube

Gamers who reserve Pokemon XD: Gale of Darkness receive a custom vinyl skin adorned with critters from the series.

Pokemaniacs will soon be able to get their hands on some skins of some of their favorite Pokemon characters. No need to call PETA, as taxidermists aren't going to start some form of indiscriminate Poke-cide and remove the creatures' pelts.

Nintendo today announced that starting August 28, gamers who preorder the upcoming Pokemon XD: Gale of Darkness will receive a custom GameCube vinyl skin featuring some of the pocket monsters (see picture). The blue skin features several characters and the Pokemon XD logo, and it covers the entire console.

Gale of Darkness, which will be released for the GameCube on October 3, takes place in an alternate universe (XD stands for Xtra Dimension), which serves as a sort of bizarro planet for the normally amicable creatures, housing dark Pokemon with sinister shadow powers.

Pokemon XD: Gale of Darkness is rated E for Everyone and will retail for $49.99. For more information on the game, check out GameSpot's previous coverage. 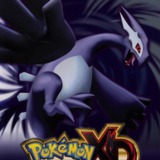