The Adventure Company will be continuing its series of game remakes of classic Agatha Christie mystery novels with Evil Under the Sun.

The story will feature famous fictional Belgian detective Hercule Poirot, who is tasked with investigating the murder of a popular actress on a stunning tropical island. Poirot will interview more than 20 unique characters who all had some kind of ties with the actress and scour the island for clues.

The latest game will feature a number of improvements and added gameplay elements, which have been made as a response to player feedback. These include a new inventory system, dialogue choices that impact events, less repetition in sleuthing, and more diverse environments to explore.

Whereas the last Agatha Christie adventure game, Agatha Christie: Murder on the Orient Express, featured Hercule Poirot as a non-playable character, in this game players will be able to step into his shoes.

AWE Games, the company that worked on the previous two Agatha Christie games, will also be developing this one. The game is likely to receive a T for Teen rating under ESRB, and 12+ under PEGI ratings. Agatha Christie: Evil Under the Sun will be Windows Vista compatible. 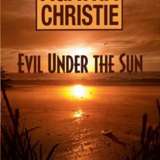