While light-gun shooters have become relatively rare on the PlayStation, Namco keeps churning out a new Point Blank game every year, and the series has gotten better and better with each new installment.

Namco's strength has always been its diversity. The company has shown that it is capable of producing powerhouses like the Tekken and Ridge Racer series, and it has also shown that it's willing to take a chance with innovative titles like Klonoa and Time Crisis. One of the company's riskier gambles is the Point Blank series. Originally an arcade game that depended on a force feedback light gun, the series was ported to the PlayStation and packaged with the GunCon--a home version of the light gun used in the arcade version. And though both Point Blank and its sequel were great games, a dying genre and the expensive and hard-to-find light-gun controller have kept the series from being the popular party game it should be. Namco is trying to change all that with Point Blank 3, giving the series more of what it needs--frenzied multiplayer mayhem.

Point Blank 3 essentially picks up where the other two games left off. The game has all the same gameplay modes as the last two Point Blank titles, and it introduces several brand-new modes to the series. In the arcade mode, one or two players can challenge each other in randomly selected stages. There are a number of difficulty settings here. You can choose the four practice stages, which let you get used to the controls, or you can dive into the 16 beginner stages, the 48 advanced stages, or the 16 insane stages. In total, there are more than 80 challenging stages in Point Blank 3, which is an increase from last year's installment. The versus mode lets two people compete against each other in a chosen stage, and the winner is the player who scores the most points in each round. In the endurance mode, you are only given one life, and you have to master as many stages as possible without using a continue. In the training mode, you can select any stage you want and practice your skills and attack the high scores. Two to four players can play in the play tournament mode, while the team battle mode splits two to eight players into two teams that compete head-to-head. The party play mode is where things have really changed since the last installment. In this mode, up to eight players can simultaneously play with two light guns or take turns with one.

The Point Blank series' strong suit has always been its creativity, and Point Blank 3 offers plenty of clever new stages. You'll shoot all sorts of fun stuff in Point Blank 3, from cardboard cutouts of mafiosos and ninjas to skeleton fish, multicolored birds, and sporting equipment. The game also focuses on several different variants of the standard shooting game. You'll have to shoot specific targets while avoiding others, juggle footballs into goals, repel oncoming attacks, and even play memory and speed games. Additionally, the sniperlike challenges are back in Point Blank 3, with plenty of new stages that give you only one chance to put a bullet in a floating balloon or a falling leaf. The series' "very hard" stages have been replaced with the new "insane" stages, which, as the name implies, are insanely difficult. The game also features the standard bonus stage mode, where you choose one of four boxes for a random surprise.

The graphics are as bright and colorful as ever, exhibiting the classic cartoon style that made the series popular. Dr. Dan and Dr. Don return in Point Blank 3, making several appearances in the new stages. Though the graphics themselves aren't as nice as those seen in the arcade versions, plenty of different graphical styles keep the levels in Point Blank 3 looking extremely nice. The soundtrack has been updated with plenty of new musical selections, including some songs from other popular Namco games. The sound effects are a bit better this time around, but the overall quality of the audio is not quite up to par with the rest of the game.

Point Blank 3 exemplifies the classic "if it ain't broke don't fix it" philosophy with unchanged gameplay and more of what made the series so popular. The new multiplayer modes definitely add more to the party atmosphere of the game, and the new levels should please fans of the series. The game has no specific US release date, but it's scheduled for a March release in Europe. It's likely that the game will release here, courtesy of Namco. 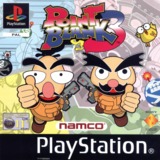