We have impressions of the final Japanese import version of this unusual GameCube action game.

Though probably not as well known as Shigeru Miyamoto or Hideo Kojima, Shinji Mikami is responsible for creating and producing a number of key games--including the Resident Evil series--in Capcom's lineup over the past several years, so it's understandable that his latest project, P.N. 03, has already received such a large following. In fact, P.N. 03 initially had much in common with some of Mikami's other work, or more specifically Devil May Cry, since it originally featured a dual-pistol-wielding heroine hopping around the screen, performing Dante-like moves. But Capcom has made a few changes since then, turning the game's lead character, Vanessa Z. Schneider, into a character that has an affinity for shooting bolts of energy out of her hands while performing small dance moves. But don't think for a second that P.N. 03 has been turned into a Space Channel 5 clone or something along those lines. The game is nothing but pure action with very few story elements or other such distractions for Vanessa while she's annihilating countless mechanical enemies.

P.N. 03 begins with a quick introductory sequence and an even quicker briefing sequence with an unidentified client that has asked Vanessa to lend her bounty-hunting skills. Shortly thereafter, you're placed in one of the few--if not the only--outdoor areas in the game, and since there are no enemies within the immediate vicinity, you can take the time to familiarize yourself with some of Vanessa's basic moves. Of course, one of the first things you'll realize is that Vanessa can't shoot and run at the same time--she needs to remain stationary to shoot energy out of her hands. Obviously, this can be a little awkward at first since enemies will constantly bombard you with their firepower while Vanessa's standing still, but thankfully she has a number of dodge moves that prove to be invaluable later in the game. When in the standing position, Vanessa can spin to the right or the left, or if you press back on the analog stick, she can do a little twirl backwards. Additionally, she can move into a crouching position and roll forward, backward, and to the sides, which can be helpful for hiding behind smaller objects in the environment.

Though you might think otherwise with all of her dodging skills, Vanessa really isn't all that agile--her control scheme is essentially similar to the one found in the Resident Evil series, in which the character controls more like a tank, so it's important to use the environment to your advantage. Most of the levels in P.N. 03 take place in narrow hallways or large rooms with multiple levels, allowing you to align yourself in such a position that you can fire at your enemy, but it can't fire back at you because its line of fire is obstructed by part of the environment. Of course, there will be occasions when you don't really have any place to hide and have to take enemies head-on, in which case you have to dodge enemy fire or attempt to use some of the special powers associated with Vanessa's suit.

Actually, there are several different suits that Vanessa can purchase at various points in the game, each of which has different ratings in one of four categories--barrier, palm shot, automatic, and energy. Barrier measures the defensive capabilities of the suit, while palm shot and automatic determine the strength of Vanessa's energy weapons and how rapidly they can fire--at the beginning of the game you have to hit the button every time you want to fire, but you can purchase upgrades so that she shoots by holding down the fire button. Meanwhile, energy simply indicates how much energy she has to use her special moves. Some suits can be upgraded only to a certain point, so you need to decide which suit would be more beneficial for your style of play.

Vanessa can perform a variety of devastating and graceful motion-captured attacks that usually take out any nearby enemies in one shot, provided they're not hiding behind some object. These moves can be performed by pressing different button combinations and will take varying levels of energy away from Vanessa depending on how powerful they are, but even the weakest special attacks can take away a tremendous amount of energy, severely limiting the number of times you can perform a special attack before finding an item to regenerate your energy. Since the levels in P.N. 03 are essentially divided into rooms, you'll have the opportunity to switch between suits or visit the shop not only before a mission but at various points in the level itself.

You need points in order to purchase power-ups and suits at the shop, and to get points you have to make use of P.N. 03's combination system. This particular system doesn't really focus on combinations but rather on how many enemies you can kill within a certain time limit. For example, after killing one enemy, you'll be given a few moments to find another enemy and kill it to continue the combination--you'll rack up more and more points if you manage to kill several enemies in succession, which isn't too difficult if you use Vanessa's special moves in conjunction with her regular attacks.

Visually, P.N. 03 is a little sparse. Most of the environments are of the indoor, almost monochrome variety, which may fit well with the techno theme of the game but doesn't actually function well as an indicator for the GameCube's hardware capabilities. The game also has some weird color-banding effects that are mostly visible on the walls, as well as some pretty generic lighting effects. Interestingly, most of Vanessa's dance animation is quite good, but in stark contrast her jumping animation is quite bad and can often make it difficult to judge where she'll land.

P.N. 03 is about as straightforward as it gets for action games. Even the manual for the Japanese version of the game, which has about seven pages on the actual game, is indicative of what type of game P.N. 03 is. Unfortunately, a North American release date has yet to be announced. 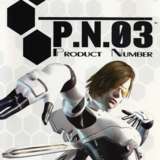